Here are some jokes you can go out and share on-site. 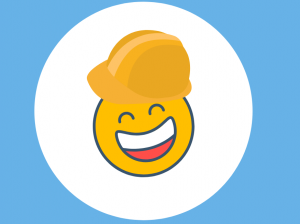 Q: How did the nosy roofer end up doing such a bad job on-site?

A: He couldn’t stop eavesdropping.

Q: Why do engineers enjoy fixing steelwork together?

A: Because it’s riveting.

Q: How many safety inspectors does it take to change a light bulb?

A: Four. One to change it and three to hold the ladder.

A Contractor in Heaven

A contractor dies in a fishing accident on his 40th birthday and finds himself greeted at the Pearly Gates by a brass band.

Saint Peter runs over, shakes his hand and say “Congratulations!”

“Congratulations for what?” asks the contractor

“Congratulations for what?” says Saint Peter. “We are celebrating the fact that you lived to be 160 years old.”

“But that’s not true,” says the consultants, “I only lived to be forty.”

“That’s impossible,” says Saint Peter, “we added up your timesheets.”

Two carpenters were working on a house. The one who was nailing down the timber would reach into his nail pouch, pull out a nail and either toss it over his shoulder or nail it in.

The other, figuring this was worth looking into, asked, “Why are you throwing those nails away?”

The second carpenter got completely upset and yelled, “You moron! The nails pointed toward you aren’t defective! They’re for the other side of the house!”

Two labourers, John and Dave, were working and John, upon a scaffold accidentally cut off his ear.

He yelled down to Dave…” Hey! Look out for my ear, I just cut it off”

A bit later Dave calls up to John, “Is this your ear?”

John looks down and says, “No! Mine had a pencil behind it!”

The homeowner was delighted with the way the painter had done all the work on his house. “You did a great job,” he said and handed the man a cheque. “Also, to thank-you, here’s an extra £80 to take the missus out to dinner and a movie.” Later that night, the doorbell rang and it was the painter. Thinking the painter had forgotten something the man asked, “What’s the matter, did you forget something?” “Nope.” replied the painter. “I’m just here to take your missus out to dinner and a movie like you asked.”

Strong Man on the Job

The strong young man at the construction site was bragging that he could outdo anyone in a feat of strength. He made a special case of making fun of one of the older workmen. After several minutes, the older worker had had enough.
“Why don’t you put your money where your mouth is,” he said.
“I will bet a week’s wages that I can haul something in a wheelbarrow over to
that outbuilding that you won’t be able to wheel back.”
“You’re on, old man,” the braggart replied. “Let’s see what you got.”
The old man reached out and grabbed the wheelbarrow by the handles.
Then, nodding to the young man, he said, “All right, Get in.

While carpenters were working outside the old house I had just bought, I busied myself with indoor cleaning.

I had just finished washing the floor when one of the workmen asked to use the bathroom.

With dismay, I looked from his muddy boots to my newly scrubbed floors.

“Just a minute,” I said, thinking of a quick solution.
“I’ll put down newspapers.”

Four surgeons are discussing who makes the best type of surgery patient.

The first surgeon says, “I like to see accountants on my operating table because when you open them up, everything inside is numbered.”

The second responds, “Yeah, but you should try electricians! Everything inside them is colour coded.”

The third surgeon says, “No, I think librarians are the best; everything inside them is in alphabetical order.”

The fourth surgeon chimes in: “You know, I like construction workers ~ they seem to understand when you have a few parts left over at the end and when the job takes longer than you said it would.”

A carpenter walks onto a job site of a large company and hands the foreman his application.

he has ever held. “I must say,” says the foreman, “your work history is terrible.

You’ve been fired from every job.” “Yes,” says the carpenter. “Well,” continues the foreman,

“there’s not much positive in that.” “Hey!” says the guy as he pokes the application. “At least I’m not a quitter.”

Marble is a valuable building material and should not be taken for granite.

I never wanted to believe that my Dad was stealing from his job as a road worker. But when I got home, all the signs were there.

“So I rang up a local building firm, I said ‘I want a skip outside my house.’ He said ‘I’m not stopping you.’

“I dedicate this show to my dad who was a roofer. So dad, if you’re up there….”