You are here: 3B Training > Case Studies > Construgomes

3B Training is proud to support Portuguese contractor Construgomes on the New Mersey Gateway Project, which will connect the north and south banks of the River Mersey with a brand new bridge. 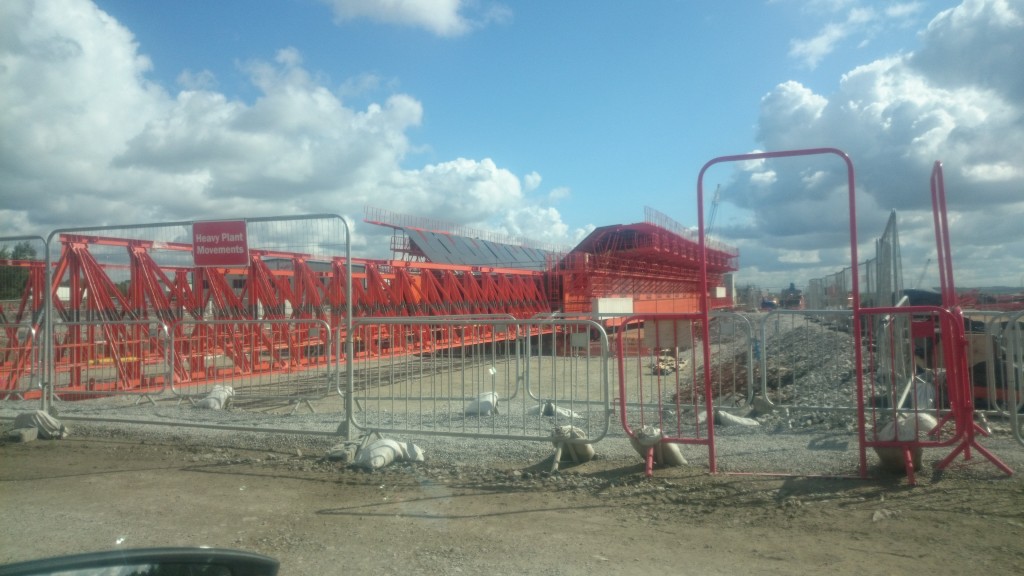 Construgomes are working with the £1.86 billion project, which was initially granted approval from the department of transport in 2006. It will assist the burden of traffic on the current Silver Jubilee Bridge and is due to be completed in late 2017.

Construgomes have been selected by the Merseylink, Civil Contractors Joint Venture (MCCJV) to complete a section of the project. They will use a movable scaffolding system to construct the approach viaducts. This is the first time that this system has been used on a bridge project in the UK.  This represents the latest technology in bridge construction.

The movable scaffold system resembles a giant Meccano set. It acts as a giant concrete mould for the roadway or deck of the new approach viaducts. The moving scaffolding system will lock onto the bridge piers and concrete will be poured into the mould. The equipment will then slide along to the next span with the sequence repeated eleven times to create the North approach viaduct. Once this is done the equipment will be dismantled and moved over to the southern approach to the bridge in Runcorn in which the process will be done again.

As well as the concrete works for the approach viaducts, Construgomes will also be completing concrete works to the three major towers which are formed within the river bed.  The 80m high central tower will be shorter than the two outer towers, which will be 110m high (north tower) and 125m high (south tower) and will be constructed using climbing formwork systems.

At its height, Construgomes will employ up to 60 staff on the project. 3B Training is committed to providing the necessary training throughout the project life. We are also maintaining a training matrix on their behalf which will ensure their operatives qualifications are kept up to date. As well as providing support by delivering the necessary health and safety advice.

So far 3B Training has provided the following training for Construgomes:

A number of the courses we have run for this client have been organised using a translator. This presented a unique challenge for 3B. The time spent off-site was minimised where possible because the courses were undertaken on the project site. It also familiarised the delegates directly with the machinery and environment they would be working on.

Nuno Freitas, Construgomes Site Manager said: “Construgomes is involved in this massive Mersey Gateway construction project and 3B Training has been an important partner throughout this journey. They have provided Slingers’, First Aid, Harness and Abrasive Wheels training amongst other courses. It’s been an important partnership between both parties and we really appreciate the dedication of 3B Training to this project.”